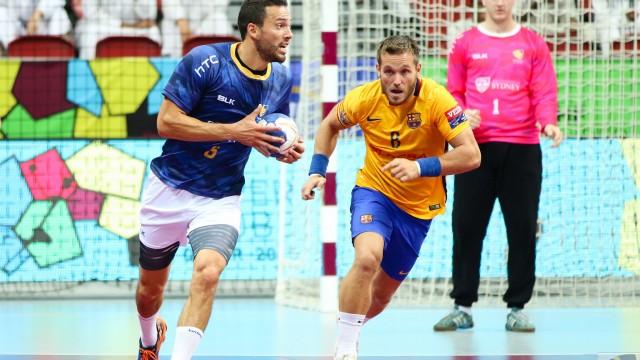 The Sydney Uni boys felt like they knew to expect a hard and tough match having come up against the 2013 and 2014 Superglobe Champions FC Barcelona in the previous year. Once again Sydney Uni’s improved performance was described as the surprise-package of the tournament as they held their own against the EHF Champions league winners.

Our guys got the first goals of the match with 2 goals from the pivot, Bonnin, before Barca scored their first. The boys were able to maintain the lead for the first 10minutes of the game (6:3) with a 3 goal spree from Diego Llorente before a few fast break goals to Barca allowed them to gain control of the match.

Sydney Uni were able to keep within reach, still only one goal difference 20minutes in. Once again, Barca quickly rallied and went into the half time break leading by 5, (14-9).

The second half started slowly with no score from either team for almost 3 minutes. Sydney always looking dangerous but world-class Barcelona maintaing their lead. Sydney Uni kept on fighting throughout keeping the pressure on Barcelona and were able to keep the match within 10 goals. With the end scoreline not representative of what a thrilling and tight match it was, Coach Enders and the playing group were extremely proud and happy with their performance in both this game and the tournament.