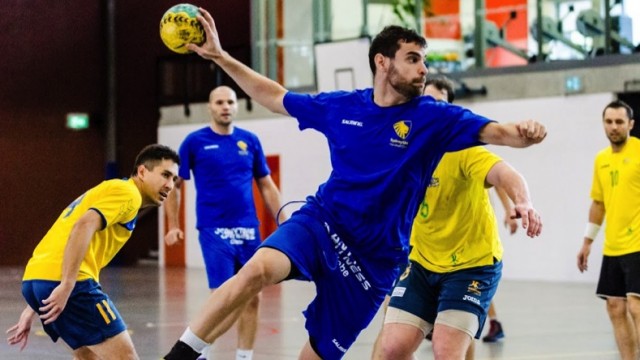 Sydney Uni took the opportunity to play a practice match against Australia’s national team, during their preparation camp in Sydney. While the game was very much played under a training preface, it was still an important test for both teams to see where they stand in their preparation for the upcoming important fixtures. Sydney Uni came away with a 30:29 win, and the knowledge that a lot of work lies ahead.

Australia’s new national team coach Jan Ottosen had asked for the game in order to prepare for the crucial qualifying games against new Zealand in just over a week. The game on Sunday afternoon was the 4th session in just two days for Ottosen’s team, and a chance to see if some of his tactical concepts were already getting traction, but also to see how the team would react under fatigue.

For Sydney Uni, it was a welcome opportunity to meet a competitive opponent and see what progress has been made since the national championships. Sydney Uni’s line-up was somewhat weakened due to its 4 national representatives Seb Traverso, Ben Fogerty, Ogi Matic and Stephane Blaise wearing green and gold for the day. The national team on the other hand was of course without any overseas players.

The result was close throughout, with Sydney Uni ahead for most of the game. The Enders boys failed to distance Australia though, and so they had to fight right to the end to come away with victory – which they narrowly achieved. The quality of the game suffered at times due to either fatigue or lack of concentration in the last session of the weekend. Both coaches came away with a clear indication of where the focus needs to lie for the upcoming weeks. Sydney Uni’s Philipp Enders certainly has noted down a list of things he wants his team to work on in the 9 weeks until the next key milestone of the season, the Oceania Club Championships in New Caledonia in June.