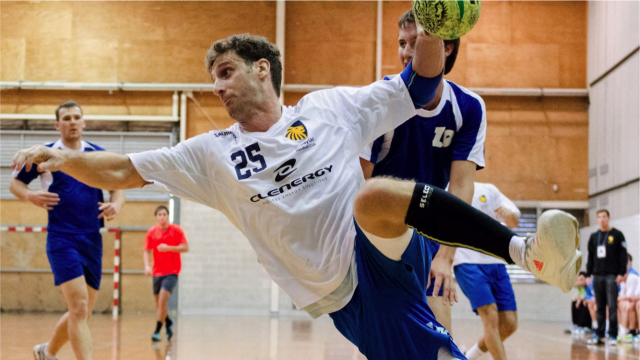 In a hard fought contest Sydney Uni won the title of Oceania Club Champion over the last weekend, and qualified for the IHF Super Globe tournament, to be held in Qatar at the end of August. In the two game playoff vs. Auckland Region Handball at Sydney Olympic Park, Sydney prevailed with two victories and an overall score of 51 to 41.

Sydney Uni did not get out of the blocks at all in game one. Not being able to hide a certain nervousness in front of the home crowd, the students were 0:4 down 10 minutes in. Auckland played confident, displayed a physically strong game, and took any gap in the SUHC defense to shoot and score. After coach Philipp Enders had taken a time out, Sydney Uni slowly got into gear and levelled the game after about 20 minutes. Led by top scorer Tomek Szklarski, they finally had a 10:9 lead at half time. The beginning of the second 30 minutes brought the decisive change in pace by Enders’ boys. With a strong Martin bang Petersen in goal, they were able to run fast breaks and showed better combinations in attack – which ultimately resulted in a 25:20 victory.

The second game saw a slow SUHC start again, and the game was even until about 15 minutes in. From then on, SUHC started to dominate the game though from their defense – with an excellent goalkeeper Thomas Gerstch saving ball after ball. The margin grew steadily, and at 26:16 after 40 minutes, there was no doubt over the overall winner of the playoff. But to Auckland’s credit, the kiwi team never gave up, and showed a strong last 10 minutes fighting their way back to an end result of 26:21. It was not enough to beat Sydney Uni, but certainly good enough to impress.

Overall, Auckland Region Handball was certainly the best New Zealand team to have toured Australia in a while. Their combination of strong individuals such as centre back Christoph Scholl and goalkeeper Hirohito Watanabe, and a gutsy team effort got Sydney Uni in more trouble than some would have expected. It’s certainly positive for handball in the region to see a kiwi team seriously challenge the Australian dominance in the Trans-Tasman. The 2013 edition of Sydney Uni looked not quite as polished as it had in Qatar last August, but then again that’s probably to be expected early in the season and with a few new faces on the court.

Sydney Uni now have 3 months to prepare for the Super Globe.